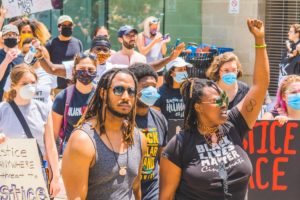 Like you, I’ve been very interested in what has been going on in our world since the death of George Floyd on May 25th 2020, in the city of Minneapolis . I think without doubt this was a heinous crime that really touched our world; a crime that resonated not only amongst black people but white people also as we saw a man dying whilst crying out to his oppressors, I can’t breathe. There has been an outpouring of anger and grief, and rightly so, however – in the UK context – things came to a head in the city of Bristol, when a statue of a prominent British philanthropist and purveyor of slaves Edward Colston, was pulled down and cast into the waters of Bristol harbour.

Many have questioned whether this was the right thing to do; likewise many have equally protested it was exactly the right thing to do . Those who protest it was wrong cite the argument that one cannot unilaterally go around the country defacing, destroying or pulling down edifices of individuals who have a suspect past. Their argument is that if these things are to be done they should be done in line with the democratic process, whereby discussions are had, a range of views are assessed and then a decision taken by those in authority either to keep statues in place or to remove them. The counter-argument is that these people who have been involved in the slave trade and are objects of past oppression of black people have no right to have prominent display in this new society; that we are living in a changed world and the celebration of these people and all they represent is no longer acceptable; that is an affront to have to walk down a prominent High Street and view daily the images of racist oppression.

There is further argument also around the historical significance of these statues, and that the toppling of them somehow erases historical truth; that this should not be done simply because we disagree with the part these individuals played in our history. We are invited to question how far do we go in pulling down monuments in light of the fact that most of our historic stately homes were built – like Great Britain itself – on the proceeds from the slave trade. 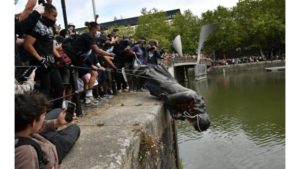 So, where does it all end and have those who argue for the pulling down of statues thought things through? Is this all a straight fight between mob rule and the rule of law?
I was recently listening to an interview with Sir Geoff Palmer: the UK’s first black professor. Sir. Geoff was born in St Elizabeth, Jamaica, and came to the UK as a 14 year-old in 1955. He is an academic (Professor Emeritus) and also a prominent human rights activist. In a interview which I found very intriguing, Sir. Geoffrey suggests that perhaps pulling down the statues was not the best way forward, but rather we should consider highlighting the actions of these historic individuals for the world to read and know about. He suggested that one option might be to leave the statues in place but also to look again at what is written on the inscriptions. Using Edward Colston as an example, consideration should be given to stating on the inscription his good deeds – philanthropist etc – but also to highlight the bad things too. For instance if he was responsible for the murder or killing of 100, 200 or how ever many slaves, this should be recorded there also, so that a balanced understanding of who that person was might be provided for all. Sir. Geoff’s argument was that if we know exactly what they did and didn’t do, that would assist in our historical perspective; that these people would not be held up to be purely great when they were in fact evil in many ways .

I think Sir. Geoffrey Palmer’s suggestion is worthy of serious consideration because – for me – perspective in all things is critical; if we are to make fair judgements one needs to have perspective .

Personally, I have no issue with those who have committed great evils in our nation’s past being vilified and mocked for what they did. In all honesty I don’t even mind their statues being pulled down if they have been erected with no historical context in terms of who they are and perhaps the wicked and evil acts they carried out. As a man who has suffered racial prejudice and spiteful treatment due to the colour of my skin, I completely understand people’s feelings on this matter. George Floyd’s death has awoken the sleeping giant that is within our young people and the rage that has been dormant within those of us who have long felt maligned and uncared for. However, the wanton ‘bi-lateral’ destruction I have witnessed cannot be the answer, because if you follow it through to its logical conclusion, much of what is historic will be burned or razed to the ground, and there goes the history of this nation; my question being, is the removal of history a concept we are willing to countenance?
I want to see a measured thought-out response to all that is taking place, one that takes into account the concepts of fairness, accountability, justice and lawful behaviour. I freely confess I don’t have all the answers, I welcome the debate, but I think it should begin right here and now.

This site uses Akismet to reduce spam. Learn how your comment data is processed.